Dpstar Group pressurisation control systems have been designed in accordance with European standards and with European standard “EN 12101-6 Smoke and heat control systems: Specifications for differential pressure systems The overpressure smoke control method consists of pressurisation by injecting air into spaces which are used as escape routes by people in the case of fire, such as stairwells, corridors, passageways, lifts, etc. This method is based on smoke control by means of the speed of air and the artificial barrier created by the overpressure. In accordance with the European standard, there are different classes of differential pressure systems in buildings, depending on their use.

In selecting and classifying the system for each specific case, it is necessary to consider the building use, size and evacuation instructions in the event of fire, as this choice will determine the necessary flow rate delivered by the pressurisation equipment. It is very important to pay special attention to the choice of the system as, depending on its class, different flow rates will be required. The stairwell pressurization system is mechanical ventilation system. In order to pressurize the stairs of vertical buildings, it is necessary to install sets of fans that suck air into the stairwell, keeping pressure of 0.10 – 0.45-inch water gauge. The main purpose is to prevent infiltration of smoke in the event of a fire.

The system consists of the installation of a fan with an electric motor mounted in a isolated compartment. The outside air is captured through a shutter that has a particle filter. The excess air is relived through manual and automatic dampers properly calculated and installed at the suitable locations. 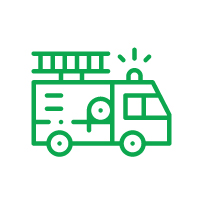 The standard describes six differential pressure systems based on their function, ranging from facilitating a safe evacuation in the fire affected area only through to keeping firefighting access smoke free while evacuation takes place.

Class A system
For means of escape: The design conditions are based on the assumption that the building will not be evacuated unless it is directly threatened by fire. The level of compartment means that it is normally safe for the occupants to remain inside the building.

Class B system
For means of escape and firefighting: This pressure system may be used to minimise the possibility of serious smoke contamination during evacuation and while fire fighters are extinguishing the fire.

Class C system
For means of escape via simultaneous evacuation: These systems are designed for all of the occupants of the building to be evacuated when the fire alarm is activated.

Class D system
For means of escape. Risk to personnel that are sleeping: These systems are designed for buildings where the occupants may be sleeping.

Class E system
For means of escape via evacuation in phases: These systems are installed in buildings where evacuation is carried out in stages or phases.

Class F system
Fire protection system and escape means: These pressure systems are used to minimise the possibility of serious smoke contamination of staircases used by fire fighters at the same time that the building is being evacuated.

With pressurisation systems from Dpstar Group, you get a combination of both processes tailored to your individual requirements. The connection to the high-quality, tried-and-tested component range from the Dpstar Group offers additional advantages  from design and commissioning to the delivery of complete safety systems.

Get In Touch With Our Experts Today!